Six Sigma Consulting for the Manufacturing Sector in China

What are the differences? When does Six Sigma make the most sense? What have we learned through our projects with Chinese factories?

In this article we compare these two approaches.

The "Lean" movement in North America started in the late 1980s as the application of the Toyota Production System (TPS) to other companies, and progressively in many other industries. TPS includes principles and tools that were borrowed from Henry Ford (flow), from German manufacturers (takt time), and many other sources.

Many well-documented case stories outside of Toyota and even outside the auto industry indicate that this approach can help a company reduce costs, cut lead times, and improve quality at the same time, while freeing up cash and requiring very little investment.

The "Six Sigma" approach was born at Motorola in the 1980s in an effort to apply a rigorous improvement framework as well as advanced statistical tools in the pursuit for higher quality. It became mainstream in North America after General Electric (which is widely admired for its management systems) made it the subject of a strategic initiative in the 1990s.

Six Sigma spread rapidly in the 1990s, through certifications at several levels (black belts, green belts, etc.) and a "package" project approach (DMAIC). The branding and the distribution of this movement were excellent. However, its positive impact on organizations is debated. Motorola no longer teaches it. GE and other high-profile companies that made it a priority have partly abandoned it.

My interpretation is that Six Sigma can bring strong benefits in the short run, but it does not promote long-term continuous improvement as Lean does.

My understanding is that Six Sigma, at the time it was developed at Motorola in the 1980s, had basically the same objectives as Lean -- to be the cheapest, a process needs to be the fastest; if it is the fastest it will also have the highest quality (through improvements based on quick feedback).

Over time, Six Sigma has become synonymous with "reducing variation", with a strong focus on improving the capability of a process to be within specifications (see illustration below). This is a pretty narrow view of improvements.

The basic framework for improvement

The PDCA (Plan-Do-Check-Act) cycle approach is very solid but the "Plan" phase is not sufficiently detailed. That first phase is critical; without it the wrong problems are tackled and/or the corrective actions are not effective. Both Lean and Six Sigma do a good job of providing a step-by-step method.

I found this nice summary on the internet: 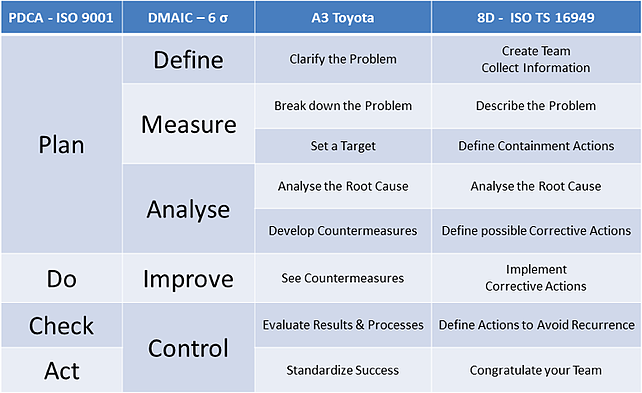 The Lean toolbox is full of technical solutions for reducing inventory, connecting processes, leveling the workload, facilitating daily management and communication, etc. Rather than identifying the right control variables and conducting statistical experiments/observations, the operators and team leaders are encouraged to run small experiments and learn from the results.

Six Sigma places a lot of emphasis on project management tools (planning, forming a good team, change management, etc.) that are valuable, and on advanced statistical tools that can be useful in some cases only.

Why do I write "in some cases only"? Based on our experience in Chinese factories, most production processes here are relatively simple and low-tech. Most of the equipment doesn't calculate its own capability, or detect abnormalities, in an automatic manner. The priority is to apply the simple tools that are often taken for granted in Western factories.

The 7 basic quality tools, which have been in use for more than 50 years, are part of the body of knowledge of Lean, Six Sigma, Project Management, and so on. According to Dr Ishikawa, they can help solve 95% of problems when used correctly. I believe that's true in today's Chinese manufacturing environment.

When it comes to improving quality and reducing cost in a fast and easily demonstrable manner (a condition to get buy-in from Chinese managers), the Lean tools are quite useful. Connecting processes and reducing inventory, while cutting costs and lead times, helps a lot with quality. When defects appear, the "trail" is still hot. It is easier to find the source and apply the right countermeasures.

This is MUCH more powerful than statistics, except for the most complex problems. When a set of physical and chemical processes interact, advanced statistics can help a lot.

Changing the culture vs. running projects

Most important in Lean are the basic principles -- involving everybody in the organization in continuous improvement. This is hard to do, but we have succeeded in engaging employees and promoting training at all levels, and it reduced staff turnover by more than 60% in several Chinese factories.

The Six Sigma approach to improvement is based on projects that are run by a few Six Sigma specialists. This is very different. An expert is required to drive a project. Improvement is the responsibility of a few individuals.

To be fair, our consulting approach borrows a bit from both Lean and Six Sigma. Chinese managers are very pragmatic and want to see a business case. A project approach is very applicable. We typically start our projects with some training but also by immediately applying some tools in a small area. That's very "Six-Sigma".

Once the positive results of improvements are visible, people become more open to the new concepts and, if the company's culture is right, we can truly engage the operators and team leaders and get their ideas. We only coach them and guide them gently, while keeping things as simple as possible. That's very "Lean".

The benefit of this latter approach is clear: the factory can make changes and keep them in place in the long term. Since the team members came up with the ideas and the implementation, they will usually not revert to the old ways.

There is a place for Six Sigma and its "project driven by a few specialists" approach. That's closer to what many Chinese factory owners expect from consultants.

However, the "SPC 2.0" statistical tools will seldom justify their use. And, if long term improvement and a deep organizational transformation is the goal, Lean is best choice. Fortunately we often transition from one approach to the other along the course of a project.

How to Choose the Right Manufacturing Consultant for Your Factory

The 6 Types of Manufacturing Consultants & Trainers Found In China

5 Steps to Cut Costs in your Chinese Supplier's Factory