Most Chinese factories focus on short-term fixes that do nothing to improve quality over the long term. The managers are constantly in crisis mode. In some cases, an enlightened manager will bring in some external assistance, but it comes with limitations.

Continuous improvement can only come from within the organization itself. But it can be top-down or bottom-up… and ideally both.

This is the purely reactive approach we see in most Chinese factories.

There is a fire – let’s put it out. Another fire – put it out. And so on. It takes a lot of managerial time, takes priority over everything else, and yet doesn’t improve the organization’s ability to produce at a higher quality.

For example, half the finished products fail the end-of-line function test. ‘How to correct it? Let’s do some repairs and get them through the testing station again.’

Another example: a customer’s inspector rejects a batch because the shape is wrong. ‘Let’s do manual adjustments and see if it passes the next inspection.”

In each case, there is no proper root cause analysis. There is no plan beyond containment and correction. Nothing for improving quality performance over the mid- and long-term.

In conjunction with firefighting, there is often a concerted effort at concealing the truth, as I described last week. It makes sense, since nobody knows WHY these problems happen and WHEN they will come up again. The situation is bad and the customers had better not know!

2. Improvements from the outside

This is typically what a consultant, an internal IE (Industrial Engineering) department, or a newly-hired process expert do.

There are issues. It is not difficult to see where they come from. It is costing money and some customers might leave. Let’s act NOW to improve quality performance!

For example, a metal cutting process creates many issues down the road and makes assembly difficult. Check the tool sharpness in the CNC machines, check the programs, and check maintenance. Act immediately to ‘stop the bleeding’.

Or document control leaves to be desired. Some older versions are still used on the shop floor. Get all the old versions out, monitor the engineers’ work, and enforce through auditing.

Do people learn something in the process? Maybe. The smart ones will draw a few conclusions. But most people only see a small part of the problem-solving approach, and they can’t reproduce it on their own. In other words, they don’t learn.

Another downside is that, since an “expert” came up with the solution, nobody invested energy into it. It can get in place fast precisely because there is no need to get people’s buy-in and no need to have people come up with the plan.

The consequence? People will not maintain the changes once the outside “experts” are gone.

To be fair, many improvements from the outside “stick” over the long run – in general because they require little maintenance. Here are a few examples:

3. Improvements from the inside (top-down) 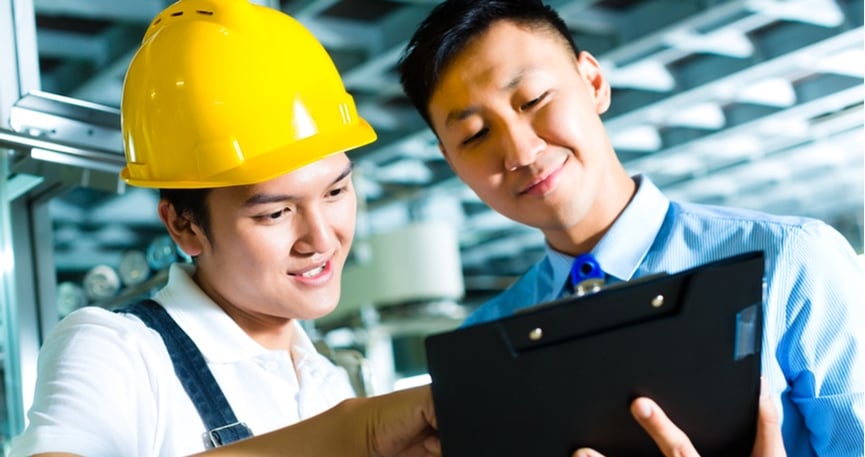 Obviously, if the top of the company doesn’t commit time and resources to working on long-term improvement, not much will happen. It can’t be another “program of the month” that gets dropped as another priority comes up

Is this easy to do? Of course not. To fix their factory, managers need to give front-line employees responsibility to put out fires and need to dedicate time for long-term improvements.

Certain key managers might feel threatened, or be unable to understand why system-level changes are necessary. They have to be replaced or ‘left aside’.

However, most Chinese companies have a very weak management system. Executives might decide something, but it doesn’t get done. So it is paramount to also engage the workers.

4. Improvements from the inside (bottom-up)

As I wrote above, unless the organization learns how to drive changes, all improvement will stop once the “outside experts” are gone.

Changes are much more sustainable if they came up internally, from the bottom up.

But how to do that? That’s where most improvement plans fall short.

If a manufacturer wants to keep improving, and sustain past changes, it has to set up a training program for its staff.

Training is not sufficient, though. Workers and local leaders need to be placed in teams and work on projects, under the guidance of more experienced practitioners.

That’s where consultants can produce the greater good to the organization. We have succeeded in engaging the staff at high level in several Chinese factories.

How to make this “new way of doing things” sustain itself? Here are a few suggestions based on our past experience:

In summary, external help can improve quality performance quite a bit, but it can do so with different time horizons – in the short or in the long term.

What have you observed? What do the best-managed factories do? How do they keep driving positive changes? Leave a comment below, we'd be happy to hear from you!