How To Get Your Manufacturing Automation Timeline Right

When speaking with Chinese factory managers, one question keeps coming back again and again: How do you do automation right? And, in particular, they are often confused about the manufacturing automation timeline to follow.

Before creating an automation timeline, many managers forget consider before going all-in on automation is whether automation will be truly beneficial in their operations. It's common to see factories putting so much time, money and resources into upgrading all their equipment, only to see minimal benefits to production efficiency.

Why is this the case? Let’s first take an example that everybody can understand easily, and then let’s look at the approach that usually makes the most sense.

Is Automation Always the Best Way to Solve Problems?

You are likely familiar with security inspections at airports, where you are required to place objects in a security tray. After placing it on the conveyor and having it scanned, you pick it up on the other side of the security station then leave the tray there.

Because the trays need to be reused by other passengers, they must be brought back to their starting point from the other end of the conveyor. These systems are called Tray Return Systems (TRS) and there are different approaches to it.

While this approach may work well in certain airports, bottlenecks may appear when staff are not paying attention to the trolley load or if the path back to the other side requires a long walk around the security area. In airports that see huge passenger numbers and where security needs to fulfil multiple responsibilities, managing the trays can get very hectic.

Many airports end up having to purchase and store large stacks of airport trays to keep up with the inefficiencies of their system—leading to a waste of money and space. It is essentially, solving a problem with another problem.

Some airports fully automate the process by having the trays automatically go under the main conveyor on a separate return conveyor, then travel back to the start. The example in the video above is from Ataturk Airport in Istanbul, but similar systems can also be seen in Dubai and larger airports in the United States.

It is an impressive piece of technology that streamlines many tedious tasks at security checkpoints. However, as you can probably already tell, this does not come cheap and will also take up more space than conventional security machines. Additionally, staff will need to learn how to use and troubleshoot such a high-tech system. 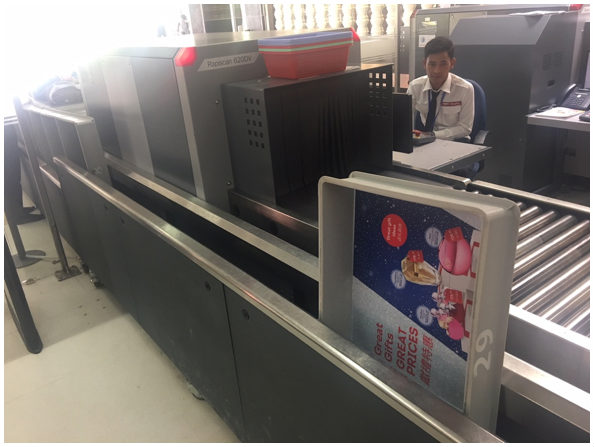 Sometimes, you might want to use your brain and come up with a much simpler solution that achieves the same result at a much lower cost and doesn’t require any advanced maintenance system. Above is a photo I took recently: the passengers place the bins in a side conveyor and, using gravity, the bins roll down on their own to the starting point.

No high-tech machinery to be spent on.
No need to provide extra training.
No extra space required.

It is sometimes possible to reduce most of the waste without needing to introduce automation.

Based on this example, the logical first steps are:

To put it within the context of our own industry: years ago, an automotive factory had an overly complex process for installing seats. It had to be done by 2 to 3 people.

They decided to use a big and expensive robot to lift the seat and install it. That robot had repeated breakdown problems (a very common challenge with manufacturing robots). When the robot was down, several people had to come on the line and install those seats. Automation was NOT a source of cost savings.

In contrast, other car plants use a mechanical assist arm that is easily operated by 1 person (see photo below). It is simple, inexpensive, and is never down. That’s the best solution at this stage of technological progress. 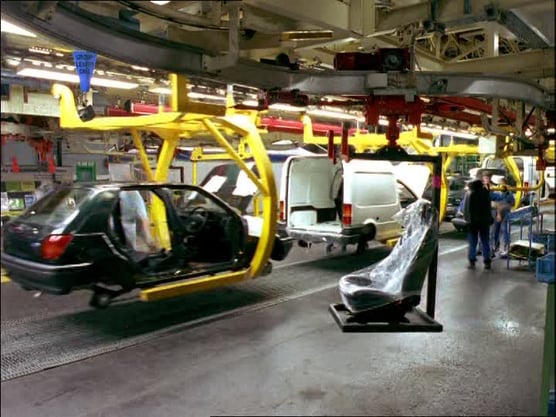 Putting automation in place might help a lot with safety, quality, and/or costs, but make sure to improve the process in a low-tech and inexpensive manner first. Once that is done, maybe the business case for investing in new machines or tools no longer shows a positive ROI.

How to Create an Automation Timeline that Makes Sense

I like this table from the excellent book Creating Continuous Flow. It breaks down the 5 typical stages a company can follow. In many cases, a process is at level 2 and necessitates a few operators, and the managers are thinking of jumping to level 5. It is often hard to convince them to take a step back and rethink their approach.

It makes sense to add automatic unloading first. This way, operators load the machine and have time to go and do other things (on other machines, for example). If issues come up, add the right type of sensor and link it to an alarm system (or have it stop the machine) – don’t pay an operator to keep watching!

This is smart, step-by-step automation. At the same time, the maintenance personnel learn how to work with complex equipment and can put in place the right preventive and/or predictive maintenance plan. This takes time.

In the chart above, you can see the jump from level 3 to level 4 is separated by “the great divide”. In many cases it is best not to cross that divide. Why?

There are four reasons for this:

Here are more details about this:

Robotic components including the reducer, servo motor, actuator and controller account for approximately 70 per cent of the total cost for an articulated industrial robot. Currently, a large number of parts such as precision reducers, servo motors and actuators necessary for the production/integration of industrial robots in China have to be imported. This is especially the case for precision reducers and precision sensors with reliable performance, as few Chinese enterprises are capable of large-scale production of this product.

In 2015, approximately 75 per cent of all precision reducers were imported from Japan while over 80 per cent of servo motors and actuators were imported from either Japan, the United States (US) or Europe. Though some enterprises have successfully sought comparable local products, performance, stability, quality and reliability are yet to be generally seen during mass production. This problem, if it remains not dealt with, will prevent improvement in quality and performance of Chinese robots.

Source: Choosing the Right Robots written by Xinhua Zhao and published in the Eurobiz magazine.

I hope we provided a clear, step-by-step approach that is applicable for most processes. I would add that a manufacturing automation strategy should be developed within the context of a wider study on the way to save costs, maintain flexibility, and make materials ‘flow’ as much as possible.

We are happy to respond to questions or comments you may have about manufacturing automation timelines or other aspects of manufacturing in general! You can leave a comment below.